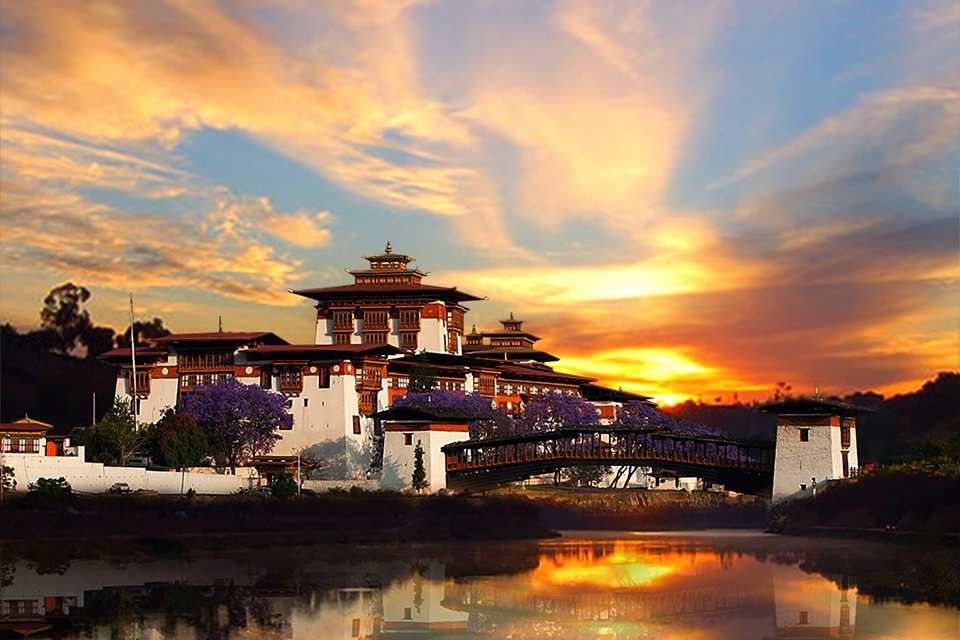 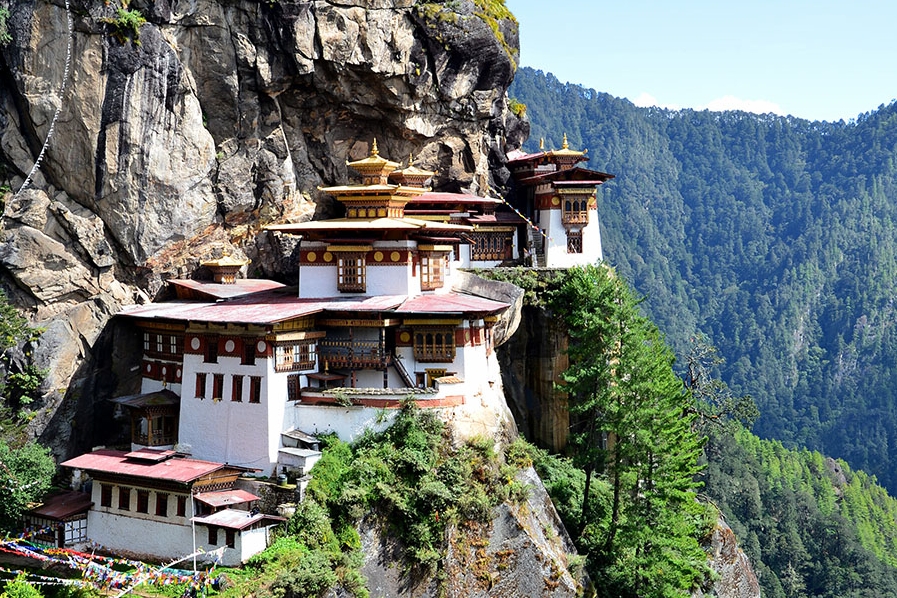 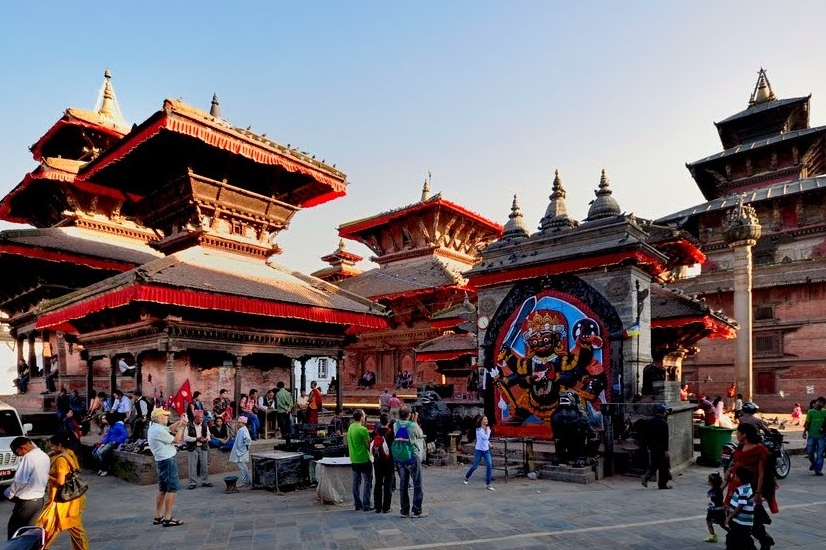 Experience the culture, traditions, and lifestyle of both the landlocked countries of Asia, the naturally beautiful Nepal, and the culturally rich Bhutan. Most of the culture of Buddhism, the monasteries, the Gompas, the prayer flags look similar in both countries. But they have their own individuality, they are special in their own ways and carry the significance of their own.
The trip begins at Kathmandu, the capital of Nepal where you will pay visits to the UNESCO world heritage sites placed at three beautiful cities of Kathmandu, Patan, and Bhaktapur. All these three cities of the medieval era are ancient Newar cities, all three have an ancient palace, the fort, and the temples to make your sightseeing very pleasing and worth it.
The overnight stay at the Nagarkot hills will give you the best view of the sunrise and the sunsets and also allows you to enjoy the sceneries of the Himalayan ranges, the Langtang range, Ganesh Himal, and the Everest ranges seen from afar. Kathmandu valley falls under the 25 destinations to travel in the world. It’s relatively cheaper and one gets to enjoy the beauty of both nature and cultural pilgrimages. After the sightseeing at Kathmandu, the trip takes you to another country similar to Nepal geographically and culturally which is Bhutan.
We fly over to Thimpu, the capital of Bhutan, and drive around for sightseeing. There exists plenty of Stupas, Buddhist Monasteries, Gompas, and many more to view with great cultural importance. You can see the contradiction in the Buddhist cultural heritage in both countries with this trip. Hence, come and have the best experience of your life with this multi-country trip with Odea Services.

Our airport representative will receive you at the Tribhuvan International Airport (TIA) and transfer to your hotel. Depending upon the time of your arrival, the pre-trip meeting will be hosted either on the first day or the first hour of the second day. During the evening, you will be taken for a traditional Nepali welcome dinner with cultural performances. Overnight at a Hotel. Welcome dinner included.

After your morning breakfast, you will be received by your guide for the sightseeing at Kathmandu. The sites you will be taken for are:

SwoyambhuNath Stupa: Located on the top of the hill, Swoyambhunath Stupa is a Buddhist holy site also known as the monkey temple. The dome-shaped Stupa with eyes on all four sides is absolutely beautiful. The view of the whole Kathmandu valley from the top of the stupa is breathtaking.

Pashupatinath Temple: The holy Hindu temple, Pashupatinath is the temple of Lord Shiva and also comprises many other temples. This UNESCO world heritage site is magnificent in structure and the holy Bagmati River that flows alongside is where cremation rituals are performed.

Boudhanath Stupa: Situated to the northeastern outskirts of Kathmandu, this is another holy place for Buddhists. The dome, mandala, pinnacle, the umbrella, and the whole Stupa itself is a true work of art and beauty. Recently renovated Stupa post-earthquake gives the serenity in the crowded city.

Overnight at the hotel. Breakfast included.

After the morning breakfast, you will be taken sightseeing around this city to the following places.

Changu Narayan: Situated on the top of a hill of the Changu village, Changu Narayan is a Hindu Temple or a temple of Lord Vishnu-the preserver. The temple is considered to be one of the oldest shrines of Kathmandu valley as its origin is believed to be of the 4th century. The temple is the best example of the carved woods, the metal crafts, and the stones. After completion of the sightseeing, we head on to the beautiful Nagarkot Hill for the magnificent sunrise and sunsets the hill has to offer. Overnight at a hotel in Nagarkot. Breakfast Included.

Wake up early to witness the breathtaking sunrise early in the morning. After breakfast, we will drive from Nagarkot to Patan for the sightseeings at Patan. We will visit the following places at Patan.

Patan Museum: Patan Museum located within Durbar Square has a collection of the ancient Kings, their weapons, the utensils they used, and many more. Patan Museum is another beautiful site to visit at Patan. Return back to Kathmandu and buy souvenirs and gifts and spend the rest of the evening relaxing and strolling around the streets of Thamel. Overnight at a Hotel. Breakfast Included.

The early morning flight from Tribhuvan International Airport at Kathmandu takes us to Paro, Bhutan on Druk Air. You can see the spectacular aerial view throughout the journey from Kathmandu to Bhutan. The clear weather helps you enjoy the magnificent views of the spectacular mountain ranges making way to the lush green Paro valley. Upon landing, the first thing you will come to notice is the fresh, cool breeze of the air of Bhutan. Our airport representative will fetch you and depart you for a 45-minute drive to the capital of Bhutan, Thimpu. This is the only capital city in the world without traffic lights.

At Thimpu, we visit the National Memorial Chorten first. This Chorten was built in 1974, in memory of the late King. It is popularly known as the most visible religious landmark in Bhutan. Treat yourself to a fantastic depiction of Buddhist teachings in form of paintings and sculptures at this temple. In the evening we make a visit to the famousTashichhoDzong. The Dzong places the main building of the Secretariat and Monastic Body in summer and the office of the King.

Overnight at a Hotel. Breakfast, Lunch, and Dinner included.

After the morning breakfast, we head out on a drive to visit ChangangkhaLhakhang, one of the oldest temples in Thimpu built in the 12th century. The temple hovers over a ridge above central Thimpu on the site chosen by Lama PhajoDrukgomShigpo. The interiors and the prayer wheels look pleasing to your eyes.

We then drive back to the town to visit Handicraft Emporium which comprises all handmade products for sale and also have lunch served at a restaurant in Thimphu. After lunch, we depart to Punakha via Dochula (3050 m). On the way, we make a visit toSimtokhaDzong, the oldest fortress in the country.

Leaving Thimpu, we continue on our drive to Punakha where the road climbs steeply through a forest of pine and cedar, festooned with hanging lichen high up near Dochula pass. This pass often offers panoramic views of the Himalayan mountain ranges. After stopping for tea and the view, we descend along a series of hairpin bends to the fertile valley of Punakha. Overnight at a Hotel. Breakfast, Lunch, and Dinner included.

After the morning breakfast, we head back on the road for a drive to visit PunakhaDzong which is believed to be the palace of happiness and bliss according to ancient belief. This is considered to be the second oldest and second-largest Dzong in Bhutan. The structures are majestic here as this is the ancient capital of Bhutan. After the visit to the Dzong, we drive to Lobeysa to take a leisure hike for 20 minutes to ChhimiLhakhang through the village of Sopsokha from the roadside to the small temple located on a hillock in the center of the valley. This temple is believed to be built in the 15th century. This is a holy pilgrimage site for barren women and is also known as the fertility temple.

After the hike, we drive back to Paro. On the way, we grab some lunch at Thimpu. Overnight at a Hotel. Breakfast, Lunch, and Dinner included.

The morning breakfast takes us for a drive down the winding road to the DrukgyalDzong. This is a ruined fortress and a Buddhist monastery built on 1649, located in the upper part of the Paro district, Bhutan. We get back to the drive and head on to Ramthangkha to hike up to the Taktsang monastery (Tigers nest). The hike up the cafeteria will take around 2 hours. The stunning views of the monastery where Guru Padmasambhava landed on the back of a tigress in the 8th century can be witnessed. After the hike up we walk down the same trail and visit KyichuLhahang, one of the oldest temples in Bhutan. Finally, we make a visit to the RimpungDzong, built in the 17th century to defend the valley against Tibetan invaders. The rest of the evening can be spent strolling around the main street of Paro, buying gifts and souvenirs.

Overnight at a Hotel. Breakfast, Lunch, and Dinner included.

The rest of the time at Kathmandu can be spent strolling around Thamel, buying gifts and souvenirs, or going for a relaxing massage and spa.

Overnight at a Hotel. Breakfast included.

This is your last day in Kathmandu. After breakfast, you will be fetched upon by our guide; 3 hours prior to your flight time and drop you at the Tribhuvan International Airport for your final departure. Breakfast Included.

Not satisfied with this itinerary? Make your own.
Customize

Talk to our experts 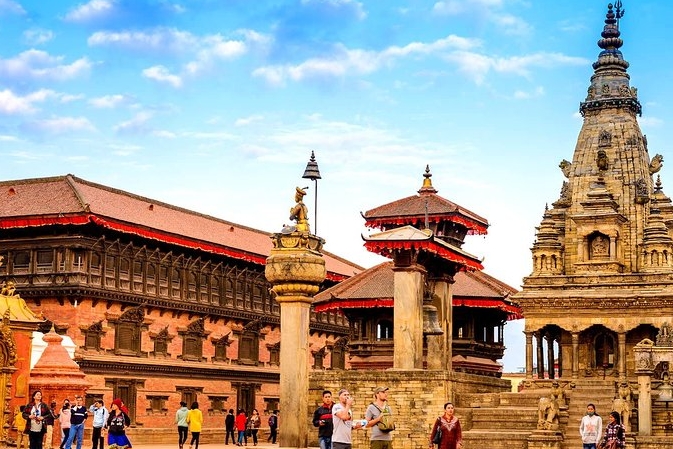